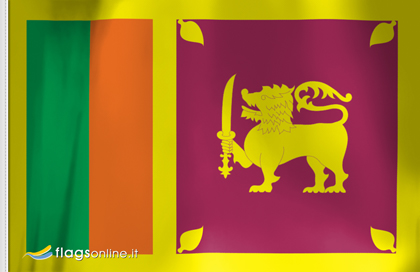 In March 2018 we have made a roundtrip through Sri Lanka. See chart below. 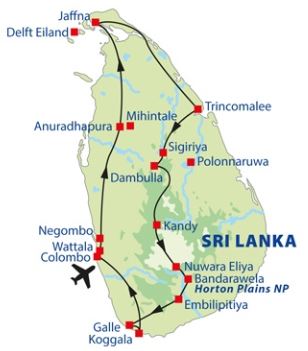 We did depart at 15:15 from Amsterdam airport to Doha in Qatar. We did fly with Qatar Airlines and did arrive around midnight. Two hours later we did depart towards Colombo in Sri Lanka where we did arrive at 09:20. From the airport we had to travel with the bus and did arrive in outr first hotel at 11:00.
The next day we did visite in Negombo the vismarket, the FOC-fort and the we walked through the citty center. In the afternone we had a boattrip overt the Duch canal. Nice nature an we did see a lot of birds and even some lizards.

The next day we did continue our trip with the bus to Anuradhapura. Halfway we enjoyed a coffeestop and a lunch. In the afternoon we did visit a Stupa on top of a Huge rock. In the next hotel we enjoyed a very good evening meal.

After a good nightrest, we did visit the Old Town we we did see a lot of remarkable things. We also did visit the largest Stupa from Sri Lanka.

We did go to the north of Sri Lanka to the city Jafna. This year that was posible for the first time after the civelwar (1983 - 2009) between the Tamil Tigers and the Sinhalese people. Underway we did take a coffee at a Barrack. The lunch was in Jafna. After the lunch we did visit a Dutch VOC-fort, it has the form of a star-shaped bastion. Also a Dutch church the was damaged during the civil war by the Tamils. And did see the ceremony to open the gate of the fort, by a number of soldieres in uniforms from the VOC era. And finaly we did visit a hindu temple wearing only a pair of pants (normaly we had to enter a temple barefoot and sholders and knees coverred).

After that we did continue from Jafna further to the north, to take a boat to the Delft Island. On the island is a hospital and a VOC-fort. During the ride with the bus over this island we did see horses descendants from the horses of the VOC era. On the way back to Jafna, we did stop for an icecreame given by the tarvel agent.

The next morning we drove to the east coast, to Tricomalee. Enjoyed lunch on the coast. First whales spotted in the sea. Again visited a VOC fortress, plus a temple on top of a rock. Slept at the Pigeon Island Hotel.

From this hotel we snorkel the next morning on Pigeon Island. We had never done this before and it was a unique experience. Lots of colorful fish and even a sea turtle. The highlight was seeing a shark swim below us.

After this exciting day we went on to Sigiriya. On the way during the coffee break, buy a stop for drinks. The hotel of the coming night does not have a drink. In the afternoon the famous Lion Rock climbed. Had a mirror wall and a few Frescoes. On top of the rock, after a lot of stairs, a ruin of a former palace. At the end of this day we drove through to our hotel, which consisted of tent lodges.

After this overnight stay we went to the old ruin city of Polonnaruwa. Along the way we saw young elephants walking in the field. The ruin city was stretched out, and that is why we visited this city by bicycle. Particular city, with Stupa, and a palace but also a monastery. There were also 3 buddhas, a sitting, a standing and a lying. On the way back, we saw an elephant in the roadside.

The next day we first went to Dambula. Here were 5 temples behind each other in a cave. With beautiful wall drawings and colored Buddhas. We also visited a herb garden in Matale, and a dance performance after lunch. Our Hotel in Kandy was on top of a mountain. The bus could not get there, so we were brought upstairs with minibuses.

After a good night's sleep we went to visit Kandy. We visited the famous Temple of the Tooth, where the left upper canine of Buddha is kept. Then we visited a gemstone company and a wood carving company.

The next morning we went by train from Kandy to Campola. It was a crowded train but it was also a very nice experience. We now came to the area where the Ceylon tea comes from. Here we drank tea on one of the plantations. The overnight stay was in Nuware Eliya.

With the Tuk-tuk to the tea plantation of Lipton. Here the whole process of tea production is seen in the factory. Also visited a Hindu temple. Just outside Ella, a backpacker village, we have seen a beautiful waterfall.

Today we have visited the Elephant Transit Home in Uda Walawe. Feeding at 12:00 experienced. Very nice to see how that goes and goes. In the afternoon we did a Jeep Safari. Many elephants, water buffalo, crocodiles and birds seen. After returning to the hotel we had a farewell drink from our driver and his companion.

The next morning we visited a local banana market. In Galle lunch at a local sandwich shop. After lunch in that city also visited a VOC fortress, even with a Dutch Reformed church. After the visit to Galle we drove on to our last hotel in Koggala.

The next day we had a beach day. The sea was very rough and there was a strong surf.

The next day we had to get up early (06:00) because we were going to make a whale trip. We sailed for about twenty kilometers to the sea and then we saw Dolphins and bottlenose dolphins and at some point also the Blue Whale (whales).

On our last day we walked from our hotel via the beach to Koggala. We visited a turtle shelter and released 2 turtles of 3 days old in the sea. Our last Sri Lankan money spent on a leather backpack and slippers. At the beginning of the evening we went to the airport for our return flight.